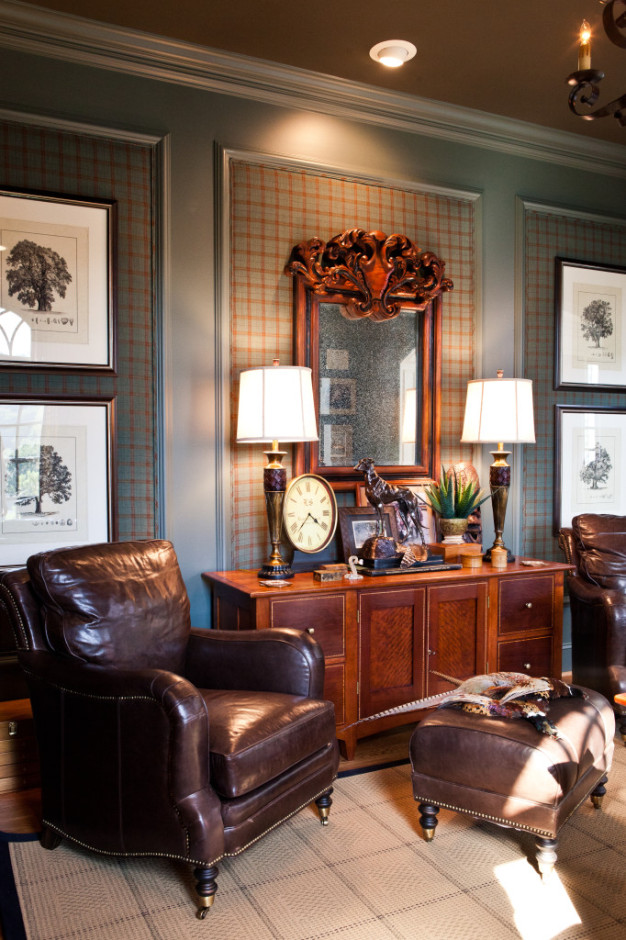 …and other unusual design questions

I get a lot of the same questions in my line of work. How high should I hang my dining room chandelier? Does all the furniture in my living room have to sit on the rug? What’s your favorite neutral color?

So, when the phone rang in my office one day and the caller asked, “Are you comfortable working with animals?” I thought I was being punked.

“What kind of animals?” I asked.

I quickly responded, “I prefer dead animals to live ones, especially the exotic variety.”

Of course I was using hyperbole to get a laugh, but the point is that this is not your average, every day design question. However, being positioned in the Southeast, where hunting is not just a hobby but a way of life, many of my clients have this predicament. Many husbands want to display their recent reward from a hunting trip in their wives’ sitting room. Do I hear a collective gasp from some of you Northern transplants? Perhaps, but animal trophies can bring a bit of the exotic to any space, formal or casual.

Political Correctness Alert! This can be a hot-button topic for some, especially in light of illegal poaching that takes place in third-world countries. But, there is a certain bit of the exotic that can be achieved by positioning responsibly acquired animal trophies in any type of room.

Westerners have been mesmerized by the exotic of every sort since Dutch merchants began bringing all that they found while trading from the Far East. From beautifully painted porcelains, to the skins of wild animals never seen in Europe, Europeans have been captivated with introducing new things into their old salons. Since Napoleonic times, we have seen the use of leopard print used as a design motif. This, of course, was propaganda. By covering an Empire style bench in leopard print, they were displaying France’s leadership in the world as they took North African territories from their European foes. It also created a visual tension between the gilt formality of the furnishing and the “wildness” of the cover. This tension made the stool more dynamic and in turn created a more dramatic statement in the room. Oh, and another lesson we can take from this is that for centuries politics have been involved in all facets of society—even interior decoration.

I know what you may be thinking. My husband’s deer is not as exotic as an antelope. And, I would say you are correct. However, the challenge is to make his deer AND your room look great. 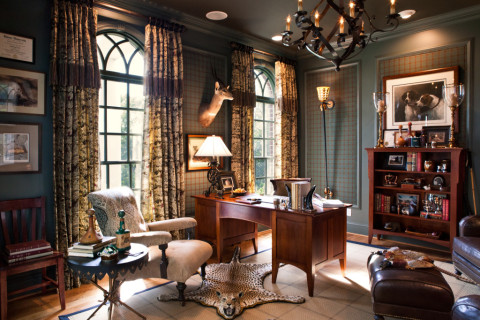 For most interior design projects, if the client has animal trophies, I want them to fit into the design scheme, not stand out. So, where should they go? In my opinion, the Library or Study is a natural fit in which to include taxidermy. These spaces are most commonly fitted with paneled walls finished in a rich stain, which looks great with the colorings of the animal skins and horns. These are also inherently masculine spaces where the visitor is expecting to find such wildly fantastic objects. Rich leather upholstery, dark stained floors and fabrics, such as wool plaid, create a lush tableau that men particularly enjoy.

However, there are also formal spaces where you can use the animal motif to your advantage. In my client’s home (he is an avid safari hunter), I used a pair of kudu trophies to highlight the fireplace in their formal Salon. I am a huge fan of using pairs in my designs, because they instantly create formality and drama. Pairs force you to look at the object they are flanking. I was particularly fortunate that these kudu were mounted in mirror images, which worked perfectly in a pair, as they seem to be facing one another.

The kudu are also huge, so I had to consider where to locate them so that they wouldn’t overwhelm the space. As you enter the two-story room, you are awed by the creatures facing one another while also feeling comfortable by the proportion they bring to the space. Two-story rooms can create awe in the visitor, but also can make them uncomfortable because the space is so large. By using the very large kudu, I was able to fill the space appropriately to create a sense of comfort while also keeping the space formal and visually stunning. That’s a win-win.

Still perplexed as to where to put that deer trophy, or eh-gads, his stuffed squirrel on a log? (By the way, this is not hyperbole, I’ve really had to decorate with one.) Think of it as styling a set. Use the animal as a theme. If you have a squirrel trophy, (this is the worst scenario I can imagine!) use a fabric that has oak and acorn motifs in the room. Perhaps place a pillow in needlepoint with quail and foxes on a leather sofa with a zebra rug under foot. As you layer in other wild game, you will take the eye off the squirrel and it becomes just another motif in the room. To keep this from looking too programmed or “campy”, don’t be too literal. Notice, I didn’t suggest using all squirrel fabrics. If your trophy is a deer, or mountain lion or elk, think of other motifs that go with that. 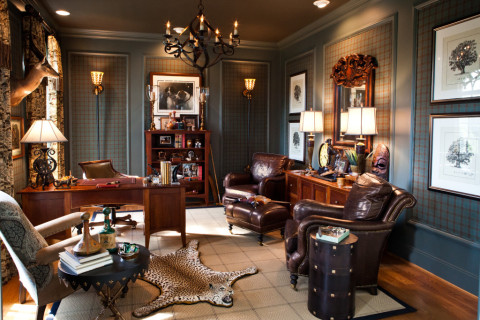 Another trick I use when decorating with animal trophies is to make them as dressy as possible. As I am completing rooms that require I insert a man’s prized trophy, I try to elevate the space by using dressier finishes on casegoods, such as tables and chests. This keeps the space from feeling like a man-cave and more like a sophisticated room where a gentleman can retreat with like-minded friends to enjoy a drink or even a cigar after dinner. By selecting tables that have a mahogany flame veneer top with a French polish and bronze hardware, I am creating the feeling of an English country house, where the noble class retreated. When I create this kind of environment, I find the women will even wander into these spaces and want to enjoy them as well.

One of the great joys in my work is in taking an eyesore and creating a sparkling diamond. That is how I see working with animal trophies. They can at once be so menacing and scary, and yet be so regal and elegant. It all depends on how and where they are positioned in a home. (This is also how your husband can be, but that’s a different article.) So, the next time your husband comes home from a guys weekend in the woods with Bambi’s dead father, don’t shun his kill from the house. Consider these tips I’ve used with some of my clients and find a place where it can be a true trophy for both of you to appreciate. He and your guests just may thank you for it.