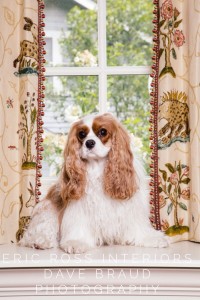 Meet Prince Darby. A three-year old (note: that’s 21 in dog years) registered full-bred Cavalier King Charles Spaniel. A blue-blooded dog if there ever was one, hailing from Charlottesville, Virginia, of the Vanity Darling Cavaliers, just a stones throw from Monticello.

Prince Darby is the 17th son of Orchardhill Spoken For and the grandson of Pascavale Enchanted from England. He has made his home in Franklin, Tennessee — the county seat of Williamson County named for Benjamin Franklin. He has found himself under the care of Mr. and Mrs. Eric and Ruthann Ross. Though his fortune has been split among his father’s offspring and he has little with which to advance himself, his situation is more comfortable than most. He is able to indulge his passion for design and locally made delicacies.

Every year, exactly one week after Steeplechase and the debaucheries of the day have been washed away by the groomers and Darby has recovered his normally stoic temper, his portrait is made in the family manor by renowned photographer Mr. David B. Braud, in the manner of his ancestors before him.